The BCRP, which is called Plymouth Against Retail Crime (PARC), runs a team of Rangers who wear high visibility uniforms and are equipped with body-worn cameras to carry out patrols to combat retail crime.

Patrolling the city centre seven days a week, they provide a front-line deterrence to help protect offices and shops from low-level crime like shoplifting and tackle anti-social behaviour, such as street drinking, substance misuse and begging.

They are trained to provide first-aid assistance and are often first on scene to help members of the public who collapse or fall in the street or anyone who is the worse for wear through drink and drugs, before paramedics arrive. They also help direct tourists and have become regarded by businesses as ambassadors for the city. 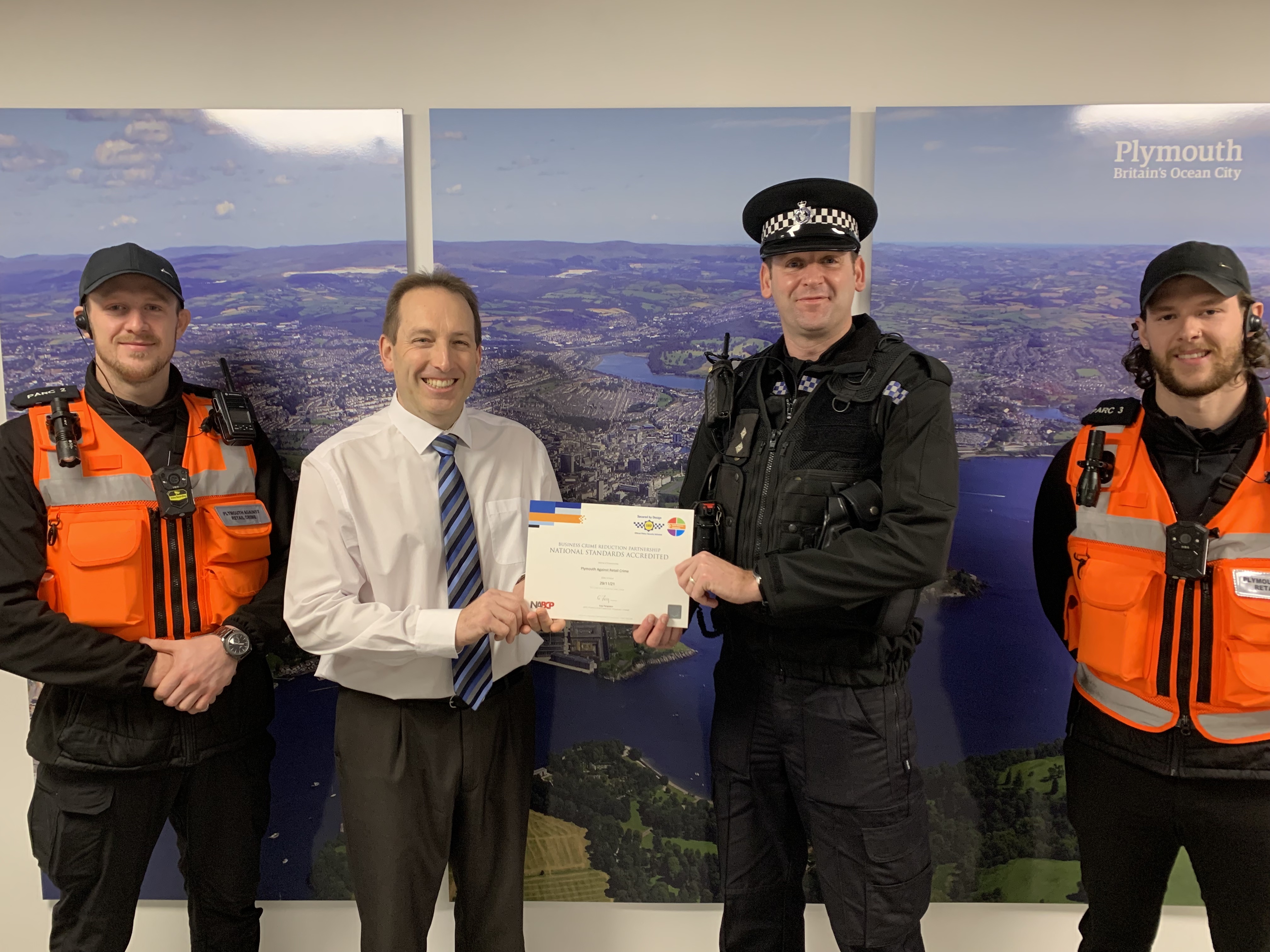 The Rangers are provided by Plymouth-based security company Axien Security Limited, which operates within a Community Safety Accreditation Scheme (CSAS) under Section 40 of the Police Reform Act 2002, which allows police to give permission for persons other than police officers to exercise limited but targeted powers in roles that contribute to maintaining and improving community safety.

Police Crime Prevention Initiatives, a police-owned organisation which works alongside the Police Service around the UK to deter and reduce crime, has been nominated by the National Police Chiefs’ Council to undertake the assessment of all private sector companies seeking to run a CSAS.

Police CPI carries out checks to establish whether companies are ‘fit and proper’ to exercise CSAS powers and then makes recommendations to Chief Constables in the area the scheme will operate. It is Chief Constables in England and Wales who decide whether to accredit employed people already working in roles that contribute to maintaining and improving community safety with limited but targeted powers.

Police CPI has assessed more than 120 private sector companies seeking to run a CSAS. The scheme has significantly increased the number of businesses able to deliver services that reduce low level crime and disorder whilst assisting police by easing demands on their time and resources.

Managing Director of Axien Security, Darren Hession, said: “It is great to see that PARC has renewed its National Standards Accreditation. We are thrilled to be involved and supportive using CSAS, which allows our staff to continue with the excellent work they do as PARC Rangers within Plymouth City Centre. The scheme has also helped us work alongside other CSAS accredited organisations, such as the National Trust’s Dartmoor Rangers.”

PARC renewed its National Standards Accreditation with Police CPI, which is also the accreditation body for BCRPs. The accreditation encompasses good management practices and procedures to ensure BCRPs are functioning in an ethical and professional manner within the law, such as membership agreements, data security and compliance with current legislation including General Data Protection Regulation.

In addition, BCRPs are required to demonstrate that information received by members and partner organisations is robust, up to date and easily accessible 24/7. For some BCRPs, this includes the use of CCTV and radio links with members.

Operating from its base in Plymouth’s City Council CCTV control room in Armada Way, PARC exceeded in 48 out of a total of 56 standards. Its membership is drawn from both the day-time and night-time economies ranging from shops and offices through to pubs, bars and clubs, and works with a variety of organisations like Pubwatch and the Royal Navy Police.

Launched in the city centre 2001, PARC later extended its remit to the whole of Plymouth with the latest on-going projects including patrols to protect car parks and boats. It became the UK’s first retail crime scheme to become a limited company. It has gone on to receive a string of business, shopping and town centre management awards.

Ian Warmington, the BCRP’s Business Crime Manager, said: “In conjunction with the city centre company, the police and several other agencies, the PARC Team continues to make Plymouth a safer place to work, play and visit.”

Guy Collyer, of Police CPI, said: “On its re-accreditation, PARC not just met, but exceeded the vast majority of standards to achieve an outstandingly high score. I congratulate PARC on being a well-established and well-run organisation that seeks to reduce crime and build safer communities. In doing so, it is making a positive difference to businesses, residents and visitors to the area.”

The assessment for Plymouth’s re-accreditation was carried out by David Wilson, Executive Board Member, of the National Association of Business Crime Partnerships (NABCP).

It is expected that the National Standards will enhance the level of partnership working around the country and encourage continued, significant, national business investment in BCRPs. In addition, the intention is that it will provide reassurance to police forces that data shared with BCRP partner organisations will be utilised in a responsible manner to reduce criminal activity.